RoboLogix is a state-of-the-art robotics simulation software package that is designed to emulate real-world robotics applications. With RoboLogix, you teach, test, run, and de-bug programs that you have written yourself using a five-axis industrial robot in a wide range of practical applications. These applications include pick-and-place, palletizing, welding, painting and allow for customized environments so that you can design your own robotics application. With RoboLogix, the user can run the simulator to test and visually examine the execution of robot programs and control algorithms, while plotting instantaneous joint accelerations, velocities and positions. 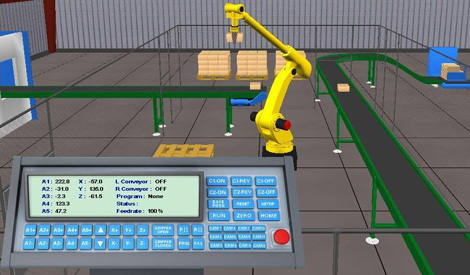 RoboLogix is ideal for students as well as robot designers and engineers. The simulation software allows for verification of the reach- ability, travel ranges and collisions. This allows for increased reliability of the planning process and program development as well as reducing the overall completion/commissioning time. RoboLogix enables programmers to write their own robot programs, modify the environment and use the available sensors. These sensors include video cameras which are used for obtaining the desired position of the robot end effector. In addition, a teach pendant is included with the simulator that allows the user to command the robot to pick up a tracked object and return it to a home location through jogged commands or pre-programmed positions.

The ability to preview the behavior of a robotic system in a "virtual" world allows for a variety of mechanisms, devices, configurations and controllers to be tried and tested before being applied to a "real world" system. RoboLogix receives control signals, determines if contact or collision between objects in the system has occurred, and returns simulated sensor information as feedback. This system has the capacity of real-time simulation of the motion of an industrial robot through 3D animation. The principles of 3D motion simulation and both geometry modeling and kinematics modeling are presented in the RoboLogix virtual environment. 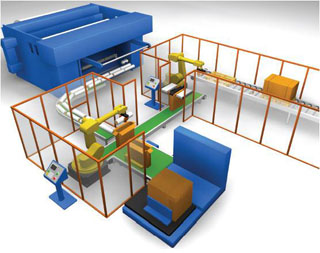 Motion control of the robot is accomplished by moving the robot from one location (position) to another. This movement is achieved by setting the angular (A1-A5) coordinates and the linear (X, Y, Z) coordinates. Generally, angular position movements are commonly used for large (course) motion and linear position movements are often used for smaller (fine) increments.

The Emergency Stop button is indicated by the large red button on the control panel. When this button is activated, power is interrupted to the entire work envelope including the robot, conveyors, and any other equipment operating in the immediate vicinity of the robot.

RoboLogix provides 12 viewpoints, or camera angles, for a given robot work envelope. These viewpoints are accessed by the twelve CAM keys and allow for the viewing from a variety of angles and perspectives. By using these camera viewpoints, the user can move around in a 3D world in much the same way they would in the real-world. When programming the robot, the camera views allow you to make fine adjustments to the arm and gripper position, or to view the entire work envelope and surrounding area.

For a more detailed description of the functions and capabilities of RoboLogix, visit the Robologix website at www.RoboLogix.com/software.php